First-of-its-kind Exhibit at Faith: Doorway Into Thanks 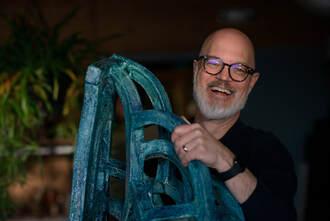 Featuring the Artwork of David Hooker

Praying
It doesn’t have to be
the blue iris, it could be
weeds in a vacant lot, or a few
small stones; just
pay attention, then patch
a few words together and don’t try
to make them elaborate, this isn’t
a contest but the doorway
into thanks, and a silence in which
another voice may speak.

“My approach to practicing art is similar to the way Mary Oliver describes practicing prayer,” David explains. “I don’t typically start with something grand in mind, and I often work with materials that are every day, ordinary, or overlooked. I come up with routines and methods that help me to focus on those materials: to help me pay attention to them, and to listen for their voice. Often what I find there is profound: a beauty, a wisdom, an encounter with mystery. My work is an attempt to connect with that encounter and to share it with others.”

An English major at Furman, David discovered his passion for art prior to graduation and went on to earn his Master of Fine Arts in ceramics from Kent State University. He soon found that “it was ceramics and fine arts––more specifically pottery––that produced the result he was seeking. For example, David says that a mug is a part of a person’s personal life–you touch it; you drink from it; it warms your hands; and you build a routine around it.”*

David, who hails from North Carolina, joined Faith with his wife, Elaine, and their two children, Abbey and Samuel, in 2020. He says that a lot of his work has “a kind of spiritual side to it, even though it may not be presenting itself as religious. It oftentimes doesn’t feel like a direct, immediate sort of connection between my faith and my work, but it’s always there.”

You won’t want to miss David’s exhibit, which will be on display in the Faith Art Gallery August 12 through October 2!

*Read more about David Hooker in “Stories from the Pews of Faith” by Walter Leavy at www.faithonline.org/stories_david_hooker.html. ​