For All The Saints - Marion Youngquist 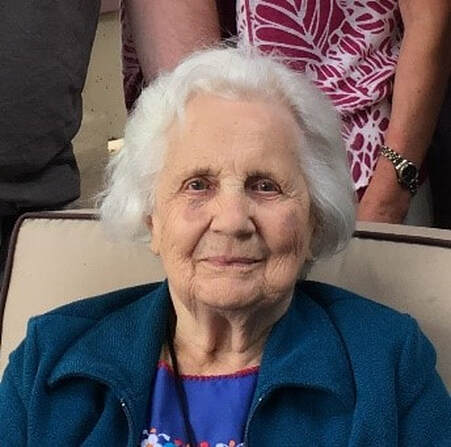 Marion was born June 20, 1924 in Salem, OR and attended Midland College in Fremont, NE where she met and married her late husband, the Rev. Theodore A. Youngquist. They were married for almost 70 years. A person of great faith, she assisted his ministry in Sacramento, CA, Akron, OH, Cedar Rapids, IA, Fremont, NE, Glen Ellyn, IL, Wauwatosa, WI and Brookfield, WI.

Marion was an accomplished seamstress. In the first years of their marriage she enjoyed making clothes and other items for family and friends. She was a great baker and kept many recipes in her head. The family loved her pies and breads, while congregations eagerly awaited her many Christmas cookies. She loved the arts, and painted for a while, both canvas and “rosemaling” in the Swedish tradition. She had a lifelong interest in journalism and poetry. After her children were grown, she was able to spend more time writing. She wrote several books with Biblical and family themes, but also children’s stories. She wrote an award-winning play, and her poetry was published in several journals. In recent years her poems delighted family and friends, and she continued writing until her death. She served on the Wauwatosa Library Board of Directors and was President for many years. She and Ted were fond of music, both classical and liturgical, and they found great pleasure in attending the symphony. They also traveled the world in retirement, which was something she had not imagined as a child she would ever do.

At her wish, services and interment will be private. In lieu of flowers, please make a donation to the charity of your choice.