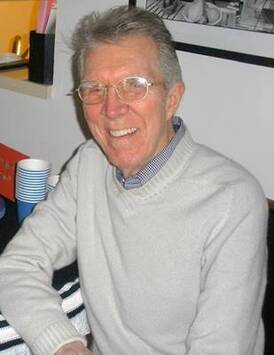 When you talk with Art Oberwetter, a five-year member of this congregation, it takes only one heartbeat for you to realize you are talking to a really unique person. For starters, you recognize that you’re chatting with someone whose heart has beaten more than 3 billion times! Three billion moments of a life that he calls “level”. No big ups or downs, nothing remarkable. Some good days, some not-so-good days. Not much to talk about.

That number of heartbeats marks Art as a 99-year-old man. As you talk with him, you soon realize that this nothing-special gentleman has a host of life lessons tucked into his always-curious brain—ideas, questions, experiences that are fascinating and useful.

A native Chicagoan, born and raised on the Northwest Side, Art lived his early years during the prosperous 1920s, but the 1930s were tough. Because of good parents, his family of five survived. “We got along,” he says. The graduate of Lane Tech gathered in all the scientific and technical elements of high school and headed toward a career as an engineer. Building on a background of night-school college courses, he became an industrial design engineer, creating large manufacturing machinery—i.e., high-speed printing presses, metal stamping presses—for a variety of employers during his long career.

In 1951, Art married Brita Tungesvik, a nurse and recent emigre from Norway. They settled first in Chicago, then North Riverside. Two daughters arrived along the way—one now living in Berkeley, CA, and the other in Omaha, NE. The young couple were members of churches wherever they lived—at one time also Presbyterians!  During their years in North Riverside, Art served as a member of the Komarek Schools Board (District 94).

While in their 80’s, they moved to Beacon Hill Retirement Community. After six years there, Brita passed away, prompting significant changes in Art’s life. However, he still lives at Beacon Hill, along with Faith members Carol and Ray Kaspar, Sandy Hill, Donna Slyfield, Naomi Barr and Magne and Judy Olson. And he remains active, having served 15 years in Vespers Support, five years in Library Support, five years as a Wing Leader and one year as the Resident Council Vice-President. “Our life is restricted right now [due to COVID-19], but we’re well-cared for,” Art says. “We can do anything we want; people here can reach their goals.”

Thinking back, Art recounts some of his satisfying experiences during his church memberships over the years. He and Brita were active members of each faith community. (For 40 years, Art was part of a long-lasting [Lutheran] card club that played penny-ante poker!) He sang tenor in each of those church choirs, a volunteer activity he continues as part of Beacon Hills’ Vespers Choir.

When Art thinks about his 3-billion-heartbeat life, he is amazed and grateful for both past and present circumstances. He wakes up many mornings with a song to sing—as a tenor, of course! He is an avid exerciser, taking advantage of the several (now online) exercise programs at Beacon Hill.

Further, he confesses to almost being an information addict. “I marvel at myself—that I have so much insight and memory, except when I am having a senior moment,” he says... “When I was young, all we had was the radio (no news) and the books we read. We didn’t know what was going on. With technology, there’s so much more information available to us.” And that’s perfect for a man whose insatiable appetite for knowledge takes him to many sources, including e-news, news magazines, PBS, Twitter, Facebook and YouTube. Currently, his favorite piece of literature is The Emperor’s New Clothes, by Hans Christian Andersen.  (See https://andersen.sdu.dk/vaerk/hersholt/TheEmperorsNewClothes_e.html)

At 99—with all that he has seen and heard—Art could be considered a walking history book, someone who could probably be a source for history buffs. Specifically, he can readily reference his own history for the inevitable lessons that reside there. As he thinks back, he also brings forward what he has learned that can be applied to current times.

Those life-lessons help the nonagenarian understand the complexities in the lives of today’s teenagers and young adults. He confesses to a certain bit of sadness about the state of the world right now, but he is insistent—even steadfast—in his desire to keep that sadness away from his grandkids and other young people.  “I don’t want to put this situation on my younger family members,” he says with empathy. “I want to help them find hope.”

“This is a time, he continues, “when you want to spread out and take over the world and dream of many things. But this crazy thing [the pandemic] comes along and it doesn’t have a definite time to it. Or answers that can help you have a sense of controlling your life.”

Part of that control, he says, comes with common-sense living that includes good nutrition, proper sleep and exercise, and avoiding addictions of any kind—television, social media, computer games. “But we do need community!”

In that spirit, it’s not surprising that Art won’t hesitate to remind younger generations—and all of us—to keep praying. When he reads the Bible—he’s been a lector for the Friday Vespers at Beacon Hill for years—he realizes that in some respects there’s not too much from that period that’s different from today. “The Bible is an aid to us,” he says. “The historical parts help us look at the present and the future.”

Just as faith has been a trusted guide for Art’s forebears, it has helped him deal with the ups and downs of his life—ranging from the death of his beloved wife of 60 years to the loss of employment and an earlier bout with prostate cancer. He is a survivor who is usually upbeat, but he still admits to blue-funk days now and then. Overall, though, a lifetime of heartbeats has generated memorable experiences that continue to provide him reasons to remain grateful and satisfied.