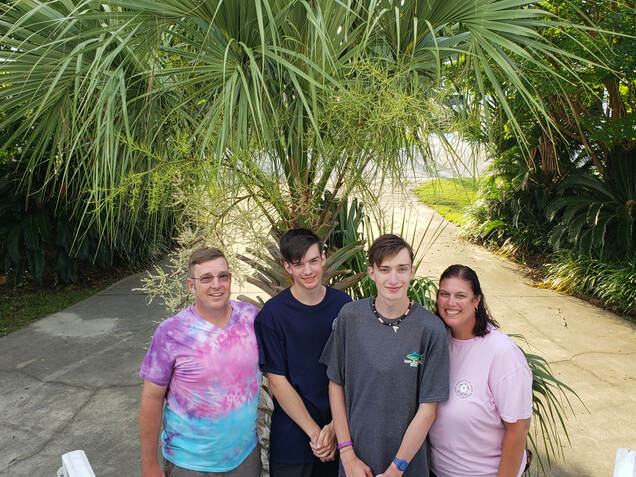 If you are looking for an example of remarkable self-confidence that’s housed in the body of a good-hearted teenager, then you don’t need to look beyond Cole Swanstrom. The recent graduate of Wheaton Warrenville South is a bright light of inspiration that has captivated Faith Lutheran Church members––many of whom have watched him develop in ways that, at one time, were basically unimaginable.

Now 19 and on the verge of a new chapter in his life, Cole is a unique individual who accentuates the positive even when faced with a personal challenge, a challenge that has not diminished the core of who he is. He is funny. He is witty. He is caring, and he’s an open book who says what’s on his mind. He also just happens to be autistic.

Like thousands of other children and young adults, Cole faces the challenges of a developmental condition that affects one’s ability to communicate and interact socially. But he has totally embraced it and excels in spite of it. For example, upon graduation he received the Kyle Jimenez Award, named in honor of the 2005 Wheaton Warrenville South graduate who fought an extended and courageous battle with muscular dystrophy. The award is presented annually to the school’s graduating senior who made exceptional achievements despite obstacles that had to be overcome. Further, Cole is poised to begin an internship this month at Inspired by Ability, a highly respected job-training program designed to assist youth with disabilities secure and retain employment. “I don’t know yet what I’ll be doing [as an intern],” Cole says, “but I like working with my hands, and I’m really excited about the opportunity.”

An early diagnosis of Cole’s condition came after his parents, Jay and Tricia Swanstrom, realized that he didn’t have an interest in playing with other children, favored live action to cartoons and preferred two-hour stints of watching trains go by Wheaton’s College Station stop rather than playing on playground equipment. When Cole was 4, the School District 200 community created an individualized educational program (IEP) specifically for him to help him achieve certain goals, particularly those involving social interaction and communication. Year after year, observers––including Cole’s grandparents, longtime Faith members Tom and Jean Pfaff––witnessed the positive developments and the confidence that appeared to grow with each inch that produced his now 6-foot-2 frame. “Cole is the guy who has deep thoughts and new perspectives on things that we don’t normally think about,” says Kayla Feil, director of Faith’s Children, Youth and Family Ministry. “He radiates joy to those around him.”

At times, Cole, a volunteer at the Glen Ellyn Food Pantry, does look at things a little differently (in a good way), and it’s that kind of thinking outside the box that has contributed so greatly to his infectious persona. According to his mother, he’s totally open and not afraid to talk with his parents about anything, even if it’s, as she says, “totally off-the-wall.” But his views generally are those that others haven’t thought about, and he can explain them so they make complete, perfect sense. That different way of thinking––which sometimes generates what the family calls “Cole-isms”––continues to be encouraged and embraced in the Swanstrom household (which includes 16-year-old brother Elijah).

With Cole, whether it’s his thoughts or his actions, people who know him have learned to expect the unexpected, but many in the church were stunned beyond belief when he surprisingly but confidently walked to the pulpit to deliver a sermon on Youth Sunday. For some onlookers, it was a heartfelt, lump-in-the-throat moment as they realized how far he had come and the courage it took him to get there. For Cole, it was something he had to do––for himself. “Someone [a church official] said they needed a senior speaker and asked me if I’d do it,” he says. “I saw it as a challenge so I said, “Challenge accepted!” Those few minutes of testimony represent one of the monumental steps in his amazing development.

Looking back, Cole acknowledges that his personal progression could not have happened as successfully as it has without the support of a lot of people, including those at home and throughout the community. But he has special praise for the church’s leaders, its varied programs and a congregation that has stood with him from the beginning. Over the years, the membership has given him an ear when he needed to be heard, encouragement when he needed a push, and the gift of unconditional love that remains undeniable. None of that has gone unnoticed by this impressive young man who is trying to serve as a positive role model for those who have similar challenges and who are influenced by his attitude, drive and determination.

That’s just another reason why observers use words such as “compassionate,”  “genuine,” “inspiring” and “admirable” when trying to describe the exceptional individual who loves making people happy and who finds much of his own happiness in his huge collection of LEGOs that, he says, are “all around the house.”

As Cole embarks on the next phase of his personal journey, new accolades are likely to come his way as he touches the lives of the people who will come into his circle. That’s just the kind of guy he is. And who would know that better than his mom, who gives her son the ultimate compliment, saying simply but pointedly: “There should be a Cole in every household.”