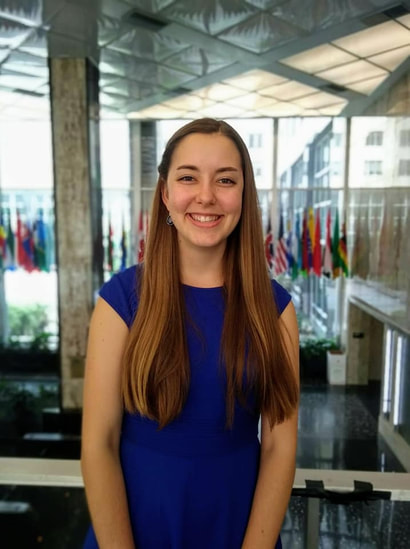 When the email arrived, it delivered one of those “Oh, no!” moments, a bit of the “Why me?” agony that comes with such disappointing, unsettling news. But Melanie Rohla, a compassionate, people-oriented person, accepted it with her usual expression of calm, grace and control––at least on the outside.

On the inside, though, things were a little different. The not-so-pleasing message that the 22-year-old received dashed her hopes, indicating that her much-looked-forward-to trip to Tanzania had been postponed because of the COVID-19 pandemic. She had hopes of continuing her studies in Swahili and eventually helping to better the lives of Africans and African refugees (some of whom could assimilate in the U.S.).

The evolution of Melanie’s desire to be a conduit for refugees who want to find a new life in the U.S. began when she was part of the two-week, 2014 FLY mission trip to Rwanda. As part of that cultural learning experience, she was not only exposed to the people’s challenges but also helped with construction at a bakery to extend the area for its patio seating. Further, when reminiscing about that trip, she still is emotional when she thinks about what she calls “a very intense and very moving” visit to a refugee camp.

Perhaps more than anything else, that trip set her on a course to craft her future. And her time at Faith has been invaluable. Melanie, her parents (Jay and Debbie Rohla) and her younger brother Nicholas moved from Spring, Texas, to Lisle in 2012 and joined Faith, where Melanie became part of FLY’s leadership team and participated in five mission trips. After graduation from Lisle High School in 2016, she enrolled at the University of Illinois Urbana-Champaign, focusing on environmental science and global studies. While there, the personable coed was involved in Lutheran campus ministry, attending St. Andrews Lutheran Campus Center and later serving as president of the Council of Ministry, which required her (as student minister) to deliver two sermons. “I actually don’t like talking in front of people at all, so it was a thing I didn’t really want to do,” she says, laughing. “But I ended up doing it anyway.”

Now back to that aforementioned email. Melanie, who is conversational in Swahili, already had studied abroad in 2018. In Kenya, she was involved in a program on international development and in Tanzania as part of the State Department’s Critical Language Scholarship Program, which gives American college and university students the opportunity to study abroad and learn languages essential to America’s engagement with the world. This past August she was excitedly preparing for a return to Tanzania after being awarded a Boren Scholarship, which allows undergraduate students to study abroad in areas of the world that are critical to U.S. interests and underrepresented in study abroad. Then she got the news––that her opportunity to return to Tanzania, where she would be studying Swahili intensively (up to five hours a day), had been postponed as a result of the pandemic. The restrictions were put in place out of an abundance of caution. She was deflated but later encouraged by current plans that the nine-month-long program will begin in January.

Meanwhile, Melanie, who describes herself as “driven, hardworking and organized,” is currently in the midst of a four-month internship with Exodus World Service, which mobilizes the Christian community to welcome refugees and asylum-seekers who want to settle in U.S. communities. Prior to that assignment, her interest in helping refugees was spurred by a 2019 Washington, D.C., internship with the Bureau of Population, Refugees and Migration in the Office of Assistance to Africa, which funds refugee assistance programs in East Africa. That two-month internship, she says, played a major role in her decision to pursue a career where she can play an important part in the lives of African refugees.

Not surprisingly, the idea of that important work was introduced to her at Faith. “I’ve been interested in refugees since high school because as part of FLY we did Kids’ Club, where we would tutor kids while their parents learned English,” she says. “So I got to meet a lot of children of refugees, and my love for refugees has continued to grow since then. In college, I chose global studies because I knew I wanted to do something international. I didn’t know what that was, and global studies seemed like a nice thing to focus on. Plus, I liked studying other cultures.”

In her 22 years, Melanie already has made her mark as a leader with an open heart for the less fortunate, and that, she says, is what makes her happy. But she’s not totally consumed by that part of her life. She enjoys all the things that other young adults spend time doing––bike riding, gardening and laughing with people. Additionally, she has special affection for her 19-year-old (yes, 19-year-old) cat, Penny, who the family adopted seven years ago.

To this point, the life of the young lady who calls herself “a bit of an extrovert” (until it comes to speaking in front of groups) has been an open book, with one exception––one that would surprise most people who know her. “I think I exhibit a very calm, cool and collected persona, but even people who I know well would be surprised to know that I stress out about almost everything––all the time,” says the nature lover who organizes her life with one to-do list after another. “It’s satisfying to finish my to-do list and create a new one. But that comes with a lot of stress that I tend to hide from people. I don’t want to burden them with that.”

Even when it comes to her personal life, she’s always thinking about lightening the load for someone else. That’s how she’s shaped. That’s who she is. As she waits to take the next step in her journey back to Africa, the former FLY enthusiast realizes the importance of patience and recognizes that everyone in some way has experienced the effects of COVID––some inconvenient, some life-changing, some tragic. Melanie Rohla is no exception. But like so many others who have to navigate during this pandemic, she believes her path is in the hands of the Lord.