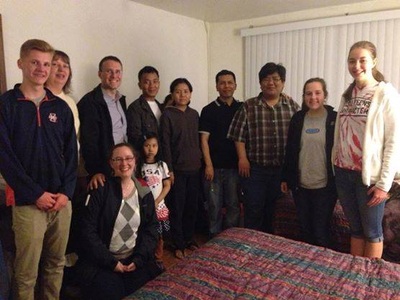 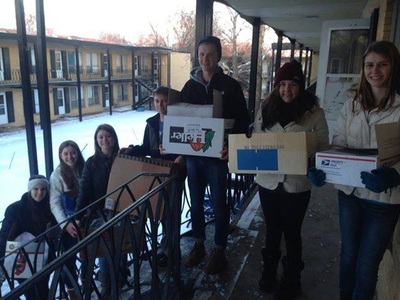 Since visiting a refugee camp in Rwanda in 2011, FLY (Faith Lutheran Youth) has maintained a Welcome to America Pack closet filled with items that newly arriving refugees need to fill their apartments in order to begin their lives in America. We then partner with Exodus World Service to deliver these packs whenever refugees arrive.

Recently, we were asked to deliver a Welcome Pack to a refugee family of three from Bhutan. Truthfully, busyness nearly made me decline the request. But after a conversation with a high school junior about justice and her passion for refugee ministry, I decided to ditch our weekly discussion and instead deliver the Welcome Pack during our regular meeting time.

So during our regular youth ministry gathering, we loaded up cars with supplies and people and headed to the family's apartment, or rather to their relative's apartment where they're staying until their own apartment is ready.

We marched up three decrepit flights of stairs and two of my students knocked on the door, explaining who we were and what we we were doing. We then headed back down to the cars and grabbed all the supplies – dishes, pots and pans, bedding, toiletries, light bulbs, and basic food staples – everything you need to fill an apartment except the furniture, which the resettlement agency provides.

We trucked back up the three flights of stairs, removed our shoes, and crammed into the tiny apartment. We piled the supplies into the middle of the living room and then sat down – anywhere and everywhere - as the family frantically ran to get more chairs.

Arjun, the dad of the newly arrived refugee family, introduced himself as his elderly father – who'd come to America three years earlier – explained in broken English that Arjun's English was not good. He then proceeded to go around the room, shake everyone's hand, and introduce himself by name, Rad. Despite Rad's own rudimentary English, what impressed me about him was his willingness to use it. Through a combination of hand motions and repetition, the 16 of us proceeded to ever so slowly piece together what he was trying to tell us.

Meanwhile, another family member who was also resettled three years ago, offered us tea, at the same time, exclaiming, “We've never had this many people in our apartment!” Immediately, I felt guilty for having brought so many people to her house, for imposing on a family who clearly didn't have much. As she left to get tea, another family member – also resettled three years ago – came in and sat with us. Rad proudly told us this young person, Reuben, spoke English the best out of everyone. And he did.

Eventually, he pointed at a guitar and asked if anyone could play. My students passed the guitar to my husband, who started strumming Mighty to Save, a song we sang a few weeks ago at Youth Sunday. Before long, students joined in singing, self-consciously at first, until they realized Rad, the elderly patriarch of this extended family, was clapping along with us. Soon, the rest of his family was too, though they seemed to have multiplied before our very eyes. Next to me, I heard Reuben's thick accent as he sang along loudly:
Our God is mighty to save, He is mighty to save.

My eyes filled with tears as I thought about what these song lyrics must mean to a refugee who knew God was “mighty to save” because he'd been saved by God as he and his family fled their country.

We finished the song and my husband passed the guitar to Reuben, who led us in another praise song before handing it off to Amith, his newly arrived cousin, who then proceeded to sing a lively Nepali song about the moon. Eventually, Amith's mom – also newly arrived – sang another song in Nepali. This woman, who knew no English, put herself out there, belting the words out to this song. She wasn't always in tune but it was nevertheless, beautiful, especially when we learned the words she sang meant “Welcome into Christ.”

By then, the tea was ready and the family proceeded to serve it, along with some food, to us. Over the next few minutes, we ate, drank, and laughed along with this family.

Eventually, we had to leave. On the way back to the church, the excitement in my car was palpable as students wrestled with what they'd seen and experienced. As I drove, I reflected on how I'd almost said “no” to this delivery because it came at such an inopportune time.

To think of all we would have missed. No discussion I ever would have facilitated would have had more of an impact on my students than meeting this family, being shown extravagant hospitality, and worshipping with them in two different languages.