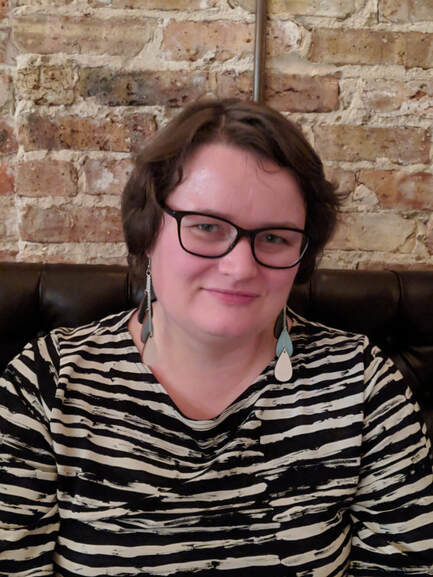 There are certain words that can paint the perfect picture of a person, describing that person to a T. Compassionate. Gracious. Concerned. Conscientious. Giving. All of those are qualities that fit Dr. Pilvi Innola. And you can add the words courageous and adventurous to further describe the woman who took the chance to follow her heart––leaving her native Finland to get closer to the love of her life and to establish her medical career in the United States.

That decision literally changed her world. So far, this amiable member of Faith Lutheran Church’s choir has experienced a life that includes some surprises, some unpredictability and a lot of commitment to those in medical need.

In 2004, the then-medical student’s path to the United States began on the Internet while exchanging views with others at a computer discussion board. Surprisingly (especially for her), it was there that she came into contact with her husband-to-be Frank Stock, an American information technologies (I.T.) specialist. During the discussion, they realized they had much in common, including the same favorite 2004 movie, Eternal Sunshine of the Spotless Mind, a romantic sci-fi film starring Kate Winslet and Jim Carrey. But Innola is quick to point out that people shouldn’t get the wrong idea about her Internet activities. “I was not looking for a husband,” she says, laughing. “That definitely was not my intent.”

When Innola finished medical school, she had no ideas about leaving Finland for the U.S., but a matter of the heart changed everything. She grew up in a small town on the southwest coast of Finland and went to medical school in Tampere, Finland’s second-largest city, which is both an educational and industrial center. After meeting at the discussion board, she and Frank began emailing each other regularly for the next year. Then the long trips to visit each other began and continued for the next four years. Their love grew, and they decided to take the next step. She applied for a “fiancée” visa in 2009, moved to the U.S. in 2010, and later that year the couple had an October wedding at the Wheaton courthouse. The following summer a blessing-of-the-union ceremony was held in Finland.

While basking in wedded bliss, thoughts of establishing her medical career in the U.S. were never far from Innola’s mind. She already had completed medical requirements in Finland, but she needed further certification to practice in the States. In hindsight, she says, she took a tougher road to certification than many others before her. “A lot of foreign graduates in America got their certification first then made the move here,” says the physician who set her sights on her career as a 12-year-old.  “I did just the opposite. So I had a pretty long way of it to complete my tasks.” It took Innola more than two years to complete the certification process, and she began her residency in 2014 at Mount Sinai Hospital in Chicago. Today, she is a part of ACCESS Community Health Network, specializing in family medicine and serving as a teacher/supervisor of residents.

It’s no surprise that Dr. Innola chose primary care because she wanted to be involved in people’s everyday lives, a choice that gives her a chance to do what she calls “grassroots medicine” and to promote better health. She has had ample opportunities to do that, especially during the COVID-19 pandemic. She also has realized that when she thought she had reached her physical and mental limits she still had something left to give of herself to help someone else in need.

That’s who she is, one who wants to help, but also one who sees the big picture of the profession in which she works. She hears the critics’ unceasing comments that medicine is a structurally unfair system that treats people differently based on race, income or ability to pay. And the criticism has touched her deeply, prompting her to consider whether she is contributing enough positively or if she is perpetuating that negative belief. “When I have proof that I’m actually helping somebody, or that somebody has actually improved his or her health through my work, that’s the best part of what I do,” she says. “But overall, I’ve come to think that I need to re-access my whole outlook about my work, and I need to be more critical about how we do it. I hear people say that [since] I’m practicing medicine in an underserved community [North Lawndale] that makes me a good person. But I want to hold myself to a higher standard. I can’t lull myself into the ‘at least I’m trying’ syndrome.”

That’s the medical and love-related side of her story. But how did Dr. Innola––who reveals that Lutheran church services in Finland are similar to those in the U.S.––end up at Faith? Music has been a part of her life for most of her life, and when she decided to come to the U.S., she knew exactly what she wanted in a church––one with a choir. So she set out to find one near her new home, using the ELCA website’s church finder. Faith was the first––and last––church she visited, offering, she says, everything she wanted. But after hearing the choir perform, she was less than confident about being good enough to join the group. Thanks to the encouragement from former Faith Associate Pastor Heidi Johns (who has Finnish heritage) and an introduction to Director of Music Ministry Todd Carrico, she auditioned and was readily welcomed into the group. “Music is a stress reliever, a way to forget about everything else, either by listening, playing or singing,” says the accomplished alto. “It stimulates the brain and soothes the soul.”

With the church, a loving husband, the choir and an established medical career, her soul is being soothed continuously. Each element of her life combines to represent an overall U.S. experience that Dr. Innola describes as “really good.” With appreciation at her core, she recognizes that she has been both fortunate and privileged while carving out a new life in a new land. Even so, Finland is never far from her mind because her family is still there, and that creates a bit of homesickness. But the medicine for that condition comes later this summer when she returns to Finland after a two-year absence. As she counts the days, Dr. Innola’s growing excitement and anticipation clearly confirm what has been said for years––and is still true: “There’s no place like home.”