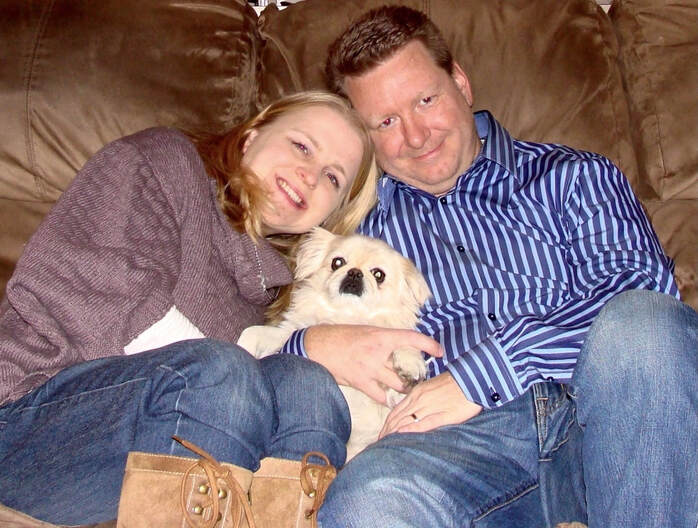 This month’s story looks at “triumph and inspiration” again, with some unique insights. This time around, you’ll meet Amy Kerman-Gutzmer and Patrick Gutzmer, new members at Faith.

An Illinois native who has lived here all her life, AMY is a registered yoga teacher, focusing on a gentle approach to these ancient practices. She has received specialized training in meditation, pre-natal yoga, yoga for cancer survivors and yoga for seniors. She likes working with beginners and more experienced folks who would like some calming in their lives. Her business model includes in-person instruction, as well as some innovative virtual approaches on several online platforms.

Formerly VP of operations at a local community bank, PATRICK now works as the vice-president of a company that specializes in commercial real estate lending. His career has also included stints as a preschool teacher, gymnastics coach and 24/7 family teacher at Mooseheart Child City and School.

The Kerman-Gutzmers live in neighboring Geneva.

The best way to tell their story is to picture three scenes that combine to form the triumphs and inspirations that characterize their lives right now.

PATRICK’S STROKE
A couple of years ago, the day after his 45th birthday, Patrick experienced an ischemic stroke while at work. Thankfully, he recognized the symptoms—e.g., change in eyesight—and got to the hospital in time for the administration of blood-thinning meds. Totally out of the blue, no family history, no warning signs, no other health problems. A stroke that was debilitating in so many ways. He could talk, but writing, reading, walking, doing math, memory? All damaged severely. He couldn’t even figure out the alphabet. A major health emergency calling for the best of medical practice and the strongest resolve to get better.

AMY’S YOGA ON THE LAWN
Patrick’s sudden health problem presented them both with problems they had not anticipated. Amy had been teaching yoga for about 10 years at the time of Patrick’s stroke; she was already fascinated with the healing properties of yoga and had worked with numerous clients overcoming serious obstacles.

She dove deeply into neuroscience, investigating some of the brain’s miraculous healing capabilities. She started on the long process to recovery alongside Patrick. She learned about the science behind stroke recovery, and resolved to function as Patrick’s coach. (“She was my biggest cheerleader,” Patrick recounts, “the driving force behind my recovery.”)

Fast forward to Faith’s Prayer and Yoga on the Lawn program. As Amy’s yoga instruction business grew—a deepening understanding of its benefits in recoveries of all kinds—she was teaching yoga at the B.R. Ryall YMCA in Glen Ellyn. She came to know women in her class who were members at Faith. That relationship yielded an invitation to be part of the Women’s Retreat a few years ago. That experience was a kind of tipping point. “I wanted to know more, to be part of a church with this kind of women as members,” she recalls. “I wanted to be part of something bigger.”

And so she and Patrick became members of Faith. As you can imagine, the Saturday morning Prayer and Yoga program emerged naturally.

PATRICK’S THERAPY EXPERIENCES
Back to Patrick’s next steps: Recovery through extensive therapy. Needing to start at essentially the beginning, Patrick engaged in physical therapy (PT), occupational therapy (OT) and speech therapy (ST). Given the profundity of his cognitive and motor losses, the road seemed almost insurmountable. The first efforts at PT ended with the dreaded news, “We’re at a threshold here; we can’t do anything more for you.” At this point, Patrick’s resolve kicked into high gear, and he and Amy switched over to Marianjoy’s rehab therapists. The road back took a long time—more than a year of combined therapies. There were setbacks, too.  Patrick remembers. “There were missing letters when I went to write the alphabet. The hardest was the letter ‘Q.’ It was as if it had disappeared from my memory completely.”

One of the most difficult elements of the stroke’s effects was aphasia, the word neuroscientists use to describe a gradual or complete loss of language. In Patrick’s case, Marianjoy knew what to do, including the long process of regaining basic literacy--word retrieval and use—and numerancy.

Patrick is one of those folks whose personality includes a lot of resolve. “I just knew I was going to get through this,” he says. “I put myself in Amy’s hands, one hundred percent, knowing that this was harder for her than it was for me.” They persevered and continued the therapy week after week, one small triumph after another. The therapists at Marianjoy became friends—Patrick and the Aphasia Center staff still stay in touch.

During his therapy sessions, Patrick was the youngest patient. He noticed how some of the patients approached therapy with only halfhearted efforts, “like they had given up on themselves,” he observes. He resolved that was not going to happen to him.

One of the glimmers of hope (and courage) that Amy and Patrick found and put to use was the power of imagination in the recovery process. “We kept visualizing about what it would mean to come out the other side of this stroke,” they both recall. Faith in the future that was more than a faint hope. Knowing and believing how Patrick would totally recover, no matter how long it took. No matter how tough the road was to travel. No matter the statistics about stroke recovery. No matter the setbacks.

THE KID NEXT DOOR AND GERTIE THE DOG
“You never know where your help is going to come from,” Patrick observes as he tells the story of how the young girl next door came over to their home to walk Gertie, their rescue dog. Not just once, but every day during Patrick’s recovery. And not just walking the dog, but spending about an hour talking with Patrick. “We just sat and talked,” says Patrick. “She was part of the therapy. Now I put her on my calendar every day as a ‘meeting’.” (This young lady still walks Gertie each day, and still engages Patrick in conversation!)

TRIUMPH AND INSPIRATION
When you put these three stories together, you start to see what was happening in Amy and Patrick’s lives. How the stories intersect to paint a larger mural of continuing triumph and inspiration that continue. “You might not see the miracles along the way,” Amy notes. “But later you realize they happened.”

Patrick talks about what’s stayed with him because of this and other rough patches in his life. “I want people to know that they can overcome anything; never to give up.” He gratefully acknowledges how his personality has changed. “I’ve changed from a Type A person to someone more laid back.  I’m enjoying my time with Amy. I’m a much happier and calmer person now.”

Both Amy and Patrick want others to benefit from their long ordeal. Helping others find perspective and well-being in spite of difficult circumstances. Amy sees the connection of yoga, stating, “What you’re doing on the mat should benefit you off the mat.” She gives the example of learning calmness and perseverance from yoga, saying, “If you can stay calm in the face of your husband having a stroke, you’re taking your yoga off the mat, and you can learn how to stay calm anywhere.”

As you’ve been reading, you’ve likely found other evidence of both triumph and inspiration in your own life. Amy, Patrick and you could have great conversations…!


PRAYER AND YOGA ON THE LAWN
Saturdays from 9:00-9:45 AM. Dress comfortably. Classes are led by Faith member and Yoga Instructor Amy Kerman-Gutzmer. Bring a mat and water bottle. Suggested donation: $10 at the time of the event. ﻿The yoga will be gentle, calming, and flowing.