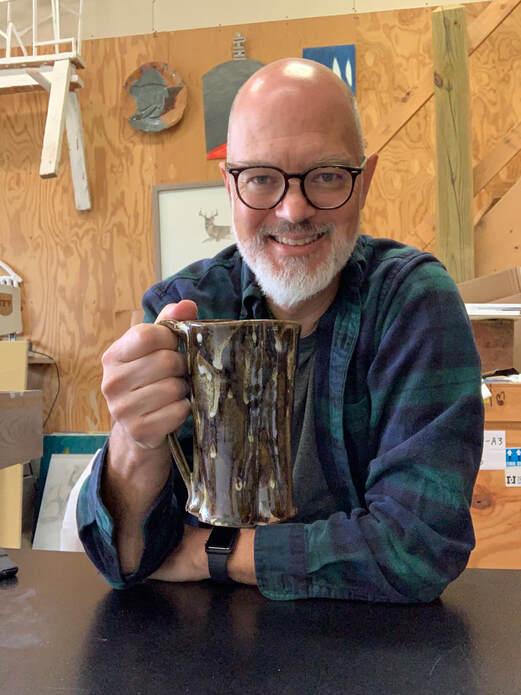 For David J.P. Hooker, an art professor at Wheaton College, there’s perhaps nothing better than art––whether he’s creating it or whether he’s teaching it. In some form or fashion, art has been a part of his life for much of his life, dating back to his college days at Furman University. Although studying as an English major, he began to take art classes shortly before graduation and that fueled new passions that, he says, changed the direction of his life.

That direction led to studies at Kent State University, a Master of Fine Arts in ceramics and a clear focus on the importance of art in Hooker’s life. “Art helped me think about ways I could engage the world and understand the world better,” he says. “And that, to me, is still one of the primary things that art does. I think that’s my overall attraction to art.”

Over the years, Hooker, who just finished his most recent rotating stint as the art department’s chairman, has made a lasting impression in the art world with an approach that not only produced objects people looked at but artwork that involved a variety of people’s senses. For him, it was ceramics and fine arts––more specifically pottery––that produced the result he was seeking. For example, David says that a mug is a part of a person’s personal life–you touch it; you drink from it; it warms your hands; and you build a routine around it. Hooker’s creations follow that pattern, including such works as a shino-glazed pitcher, a wood-fired bottle vase, a guinomi (whiskey cup) and a yunomi (Japanese teacup).

Such productions have become kind of a signature for the celebrated artist who was born in Greensboro, North Carolina, and grew up in Charlotte as a Southern Baptist. But he was introduced to the Lutheran Church early in his relationship with his eventual wife, Elaine, who had grown up Lutheran. With their two children, Abbey and Samuel, David and Elaine (who has a degree in library science and works in the development office at Wheaton College) came to the Chicago area 17 years ago when he accepted a job as an art teacher at Wheaton College. Some of that time was spent at an Anglican church before they settled at Faith a year ago––right in the middle of the pandemic. That has made it more difficult for the family to personally connect with members of the congregation (due to masks and social distancing at in-church services while others stayed home for online services). Even so, Hooker says the Faith experience has been like “a homecoming,” which marked a return to the Lutheran liturgy and Lutheran theology.

Perhaps that return could somehow influence Hooker’s future artwork. If so, where do art and the artist’s faith intersect? And how does his faith present itself through his art? “Well, at times, there has been a really direct connection. But a lot of my work has a kind of spiritual side to it, even though it may not be presenting itself as religious,” says Hooker, who has created works that focus on justice and include creations related to the Underground Railroad and Native American history connected to the Winfield Mounds County Forest Preserve in West Chicago. “A lot of the ways I think about pots are related to ideas and contemplation and ritual, and all those things are related to the way I think about my own spiritual journey and what’s important to me. It oftentimes doesn’t feel like a direct, immediate sort of connection between my faith and my work, but it’s always there.”

So, conversely, how has his art presented itself through his faith? “I think part of it is about really seeing the extraordinary in the ordinary,” he says, “like how the ordinary is full of the presence of God and trying to find ways to become more aware and attentive to that presence. I think things kind of connect that way.”

Hooker is an artist who some call “a deep thinker,” whose sensitivities are reflected in his work. But the recipient of the Dunhuang Ceramic Residency who spent two, two-month stints as artist-in-residence in Lanzhou, China, sees himself as “an introverted extrovert,” one who enjoys time alone to work and think but also enjoys gardening, tennis, baseball, barbecues and mentoring people. Further, he comes from a family of storytellers, and perhaps that talent helped shape his personality and also contributes to his effectiveness in the classroom.

In the end, the sculptor, teacher, curator, exhibition designer and art school director has found a balance that works for him as he tries to better connect and understand the world. Perhaps Hooker is in the best position to gain––and share–– that knowledge. “I’ve found out,” he says, “that I really value the opportunity to be in people’s lives the way you can as a teacher.”

And as an influential artist, too.

​
For more information on David Hooker’s artwork, go to www.davidjphooker.com

*   Formerly "Stories of Faith and Inspiration"​