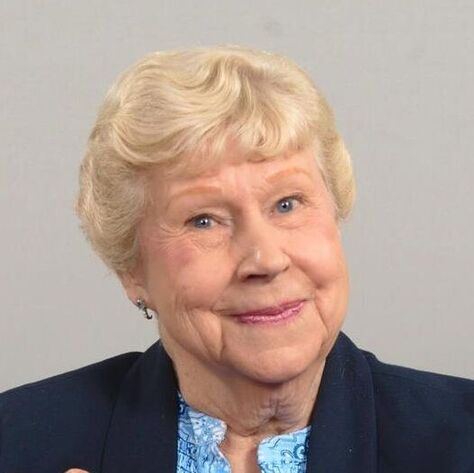 Like many congregations, Faith Lutheran Church in Glen Ellyn, Illinois lays claim to being “a family.” Fewer congregations can fit that description over 75 years, and Faith is one of them! Today’s story illustrates how “family” has been true for one of Faith’s longtime members, LEE BOYDEN. Not just the ideas and ideals surrounding family-ness, but also the life experiences that make that true.

​If you want to understand what continues to draw people into this congregation’s life, you would do well to listen to the thoughts of Lee Boyden, who has been part of Faith’s family since 1954. Back at the Park and Hillside sanctuary, back when “family” was perhaps the most cherished part of Lee’s life.

Lee was born into a large DuPage County family 90 years ago. That was during the Great Depression—by any account those were extremely hard times. The youngest of seven children, Lee was just a toddler when her mother died. That left her father with the nearly impossible task of providing for his family.  Lee’s dad realized he couldn’t take care of all of them, so he sought help from local churches in finding temporary families for his children. Lee was placed with and eventually adopted by an older couple in Glen Ellyn—the Hargreaves—parents of other adopted, grown children, through Glen Ellyn Bible Church. Lee comments, “They were old enough to be my grandparents, so I was raised essentially as an only child.” These kindhearted folks became Lee’s family, a way in which God provided her with the nurturing and love that formed her developing years.

When Lee was a sophomore in high school, her adoptive mother was stricken with a severe stroke that left her bedridden. Lee became her primary caregiver the rest of her high school years, adding to her roles as student, worker and friend. Lee embraced those responsibilities, learning that being part of a family can involve self-sacrifice beyond description.

After graduating from high school, Lee began work as a secretary in a local insurance agency, and then as a customer service agent for the gas and electric company in Glen Ellyn. “It was enjoyable work,” says Lee, “because it was a lovely office and I got to deal with wonderful people.” These were the years when she experienced the family-like bonds that can develop among work colleagues and customers. (Cooperation, mutual respect, shared goals, empathy and loyalty come to mind, too.)

After some time passed, she met her first husband, Carl Henninger, when they went out on a blind date while he was on leave from his Air Force posting during the Korean War. He served out his enlistment for another 2½ years in postwar Japan, while Lee continued to wait for him to return to the United States. They married in 1954 and joined Faith soon thereafter.

Building on his administrative role in the armed services, Carl used GI Bill benefits to enroll at University of Illinois’ Navy Pier campus, eventually completing his law degree at John Marshall Law School. After serving as a prosecutor in the DuPage County State’s Attorney’s Office and partner in a local legal firm, Carl was appointed to serve as a DuPage County associate judge in 1974. Later, in 1978, he was elected to serve as a full Circuit Court judge. Six years later, he was elected to serve as chief judge of the 18th Judicial Circuit Court, a position he held until 1989.  At the time of his death due to cancer in 1999, Carl was a revered public servant, still fiercely determined to uphold his values through the practice of law. With Carl’s death, hard times returned to Lee and her family. This time the distress came with a heartbreaking jolt that had taken away her life-partner and the father of their four adult children, Carl, Curt, Dawn and Jodi.

The “Family of Faith”—a designation that this congregation has held dearly since the 1970s –continued to support Lee. “Faith has sort of been my second home and family,” she notes. Congregation friends, pastors and members continued to hold her close. “When Carl died,” she remembers, “all my friends at Faith were so wonderful to me. If I ever had a problem, I could always go to one of the pastors, and we would talk it out. I’ve always been supported. Boy, was I lucky!”

After the 50th reunion of her Glenbard West High school class, Lee found family again in the person of Dr. Bill Boyden, a friend from those long-ago days. Bill joined Faith, quickly becoming an important part of the family—e.g., choir member and Board member of the Lutheran Youth Choir of North America. Married for 12 years until Bill’s death from cancer in 2012, they brought together their two extended families—with siblings and grandchildren—into a new relationship: Lee became stepmom to Bill’s family and Bill the stepdad to hers. The redeeming powers of family were once again at work.

Today it’s “family” that keeps Lee going. Not only her children, grandchildren and (new) great-grandchildren. It’s also the good friends she has made over the years, including new ones at her home at Wyndemere in Wheaton. “That’s always true,” says Lee, “no matter how many of them have died.” She immerses herself in family-like activities, including a book club, Bridge clubs, lots of exercise classes and singing in Wyndemere’s choir. She has organized many of her high school class’ reunions. Four classmates still breakfast together weekly. In so many ways, Lee lives out family ideals as broadly and deeply possible.

Looking back over her many decades at Faith, Lee thinks of all the people who influenced her positively. She names one of Faith’s pastors, Ted Youngquist, and his wife Marion as examples. How his sermons challenged Carl, Sr.’s theological intellect. She is grateful that Faith never gave up on the ideal that a congregation can function as a family. She always wants to remember the generations of Faith’s families who remain part of this church. “There are still a handful of younger Carl’s high school group around,” she observes. Having her babies baptized; her kids remaining part of this and other congregations; the continuing legacy of exemplary pastors; being visited by those pastors and Faith members —these are unforgettable elements of being part of this church.

You might wonder what there is about Faith that makes Lee happy, satisfied, grateful or proud.  She’s ready with her answer, one you might expect from someone for whom “family” has been the core of her life experiences, of her character: “Seeing the pews full on Sundays,” she responds. “People are coming with their families. So many young families. It just makes my heart warm.”

Lee sees how the current state of our congregation continues to build on its history. “So many young families have turned into older families and stayed here. Our current pastors have done a wonderful job of revitalizing the congregation.” These thoughts lead Lee to her hopes for the people of this congregation—especially parents. “I hope that people care for each other, in sickness and in health. That this will be a home and family for them, too.” As part of the wisdom of one of Faith’s oldest family members, that’s a blessing to cherish.

May we continue to bless each other during this anniversary celebration of this family of faith.

​This family of Faith!