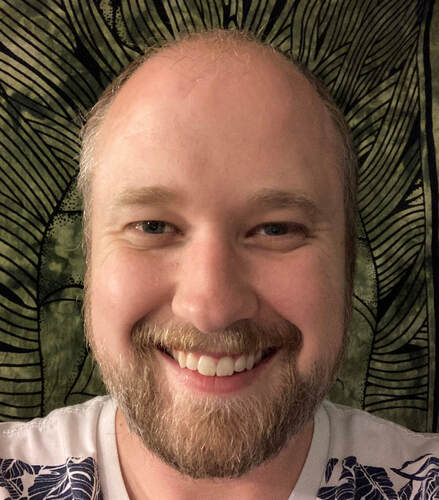 The subject for this month’s story is “Steep Hill,” otherwise known as BRENT ELLERBEE.  The roots of his first name hearken back to Old English, when that designation would have been positive. These days, though, a steep hill could refer to something difficult to accomplish or encounter. From what you will read here, Brent’s name fits him very well, in ways you might perhaps recognize as part of your own being.

One of the steepest hills any of us can face is the question of the meaning and purpose we find in our eventual careers. (Vocation names the spiritual qualities that can characterize those journeys.) In Brent’s case, the answer to that question has led him toward becoming a pastor. Along the way there have been hills—and valleys—that were sometimes difficult to traverse. When you talk to Brent about this matter, you can see how those ups and downs have prepared him for the kind of pastoring that God’s church needs now and into the future. Two things you will see as you read about Brent’s navigation of those hills: The wonderful variety of landscapes he’s traveled over, and the people who were there alongside him.

Like all the folks featured in these Faith stories, Brent’s an interesting guy. He’s a native Texan—San Antonio—and spent his formative years there and North Virginia. High school outside of Fort Hood, where his stepdad was stationed in the Army. Texas Lutheran University (TLU) in Seguin—a B.A. in Theology. Because he was raised in an Army family, he lived all over the country—usually for short-term assignments. He enlisted in the Air Force right out of high school, working for four years on F-16 avionics at a base outside Las Vegas. He spent one year as a volunteer with the ELCA’s Young Adults in Global Mission program (YAGM), assigned to two urban settings in South Africa. Presently he’s a full-time dad AND enrolled in Luther Seminary’s M.Div. program, taking advantage of the online and low-residency options.

During the years Brent was discerning the pull of pastoring, he accumulated valuable work experiences. His occupations included time as a librarian (South Africa’s Lutheran seminary); Amazon warehouse worker and staff at Morgan’s Wonderland, a theme park for folks with special needs (San Antonio). He has worked at a special education school for young adults (Minneapolis) and volunteered as stand-in preacher (South Africa).

Along the way to eventual pastoral ministry, Brent has been influenced by a wide variety of people.  In South Africa, there was Martha, the second-career German pastor; Zulu families he lived with; the Chettis (a pastor couple); the British family of the head librarian; South African Indians; Afrikaners and the staff and field workers at an ecumenical non-profit. In addition, there was Nthombifuthi Mseleku—known as “Gogo” or simply “Ma”—whose influence came from her role a grandmotherly figure. “We didn’t talk that much,” Brent recalls, “But I learned about quiet leadership from her important-but-not-quite-mother influence.” Tessa Moon Leiseth, his YAGM on-site supervisor. At TLU it was the campus pastor, Greg Ronning, as well as the lifelong friends he made during those years.

If your life journey parallels Brent’s in any way, you know how experiences and people like these can help you discern your calling. (In his case, to be a pastor; in your case, however you serve God’s will in your daily life.) He grew up as a nominal Lutheran, but found his faith in the non-denominational community of believers at the Nellis Air Force Base chapel. “That’s where I developed my commitment to peace,” he notes. The years at TLU helped him refine his faith more towards Lutheran theology. “Pastor Ronning showed me that a pastor can be different than the ones I grew up with,” he remembers. “He welcomed me into the campus church; he coaxed me into involvement with that congregation.” The onsite YAGM supervisor in South Africa helped him learn about pastoral counseling and pastoral relationships.

The steep hills? Add up all the years Brent spent before entering the seminary. Consider all the work-related experiences he has accumulated. All the side paths along the way. The necessary years of patience as he worked towards his goals. The overlapping responsibilities of father, spouse and seminary student.

As you talk with Brent, you get the strong feeling that he’s passionate about the direction and purpose of his life. “I pray a lot,” he says. “It’s important to be in communication with God.” Family—his own and the gathered communities of faith—are emotional pillars, too. “For me,” he says, “family is how people of all walks of life come together and decide to be together.” His strong metaphor for pastoring: “Pastoring helps people journey through life—like a guide!”

His determination and passion for service stand out as consistent character traits. So do the hills. As you may know from your own journeys over life’s bumpy landscapes, Brent’s experiences have coalesced as foundational qualifications for his eventual calling as a pastor. Think about it: Those jobs? They’ve equipped him to identify readily with congregation members’ daily work lives. His military service? Insight into the self-identity of veterans in his church. Working two jobs? In today’s economy, something known by many church families. The number and quality of his mentors over decades? A reminder how pastoral relationships are a key element in their effectiveness as leaders. Living all over the country and overseas? Brent will feel at home almost anywhere he ends up.

As may be true with your life, steep hills have shaped and sharpened Brent’s pastoral qualities. The fact that he’s still climbing is a tribute to him and all who support this remarkable young man. The hills will continue add meaning to his life.

To the meaning of his name….