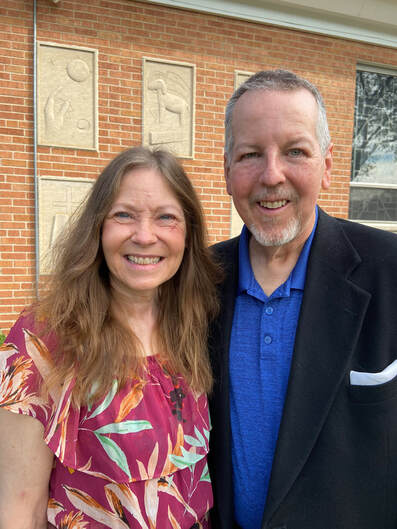 It happened so unexpectedly, purely out of the blue, but it dramatically changed the lives of the Warners––Craig and Sue––who still are trying to totally recover and get their lives back on track.

Their nightmarish medical ordeal began with Craig contracting COVID-19 in September 2021. Although things are looking up now, a nonstop series of health-related events led to things getting worse and worse and worse. Doctors believe COVID triggered other health issues that nearly took his life.

In the midst of the pandemic at a time when both Craig and Sue had been fully vaccinated, Craig was diagnosed with the vicious virus and was hospitalized when he had difficulty breathing. That’s when the roller-coaster ride of frustration, confusion and uncertainty began.

The initial thought was that Craig would be back home in a few days after his oxygen reached the proper level, but anxiety-filled days turned into an agonizing week. He appeared to be progressing well, and just before he was about to be released, Sue noticed something wasn’t quite right with her husband. During their last conversation, Craig seemed confused and “out of it,” and then stopped calling.  Doctors said his behavior was typical of COVID patients. But Sue kept stressing that there was something more serious going on and pleaded with doctors to look further. They finally agreed to do a CT scan and found he was bleeding on the brain. “That was really the moment our lives changed forever,” Sue says. “We thought he was almost ready to go home, and then this happens.”

Craig was in the intensive care unit for the next two weeks, an excruciating period for Sue because hospital COVID guidelines didn’t allow her to visit him. While talking about that episode now her voice still quivers and cracks with emotion, particularly when she recalls doctors telling her she needed to “prepare for the worst.” But after eight weeks in the hospital, Craig rallied. His oxygen increased and the bleeding on his brain (a stroke) had stopped, but the damage had been done. He couldn’t move his arms or legs and he couldn’t talk. But as time went by, there were small victories––he could wiggle his toes, give a thumbs up and squeeze Sue’s hand once she was allowed to visit him.

Doctors had to insert a feeding tube because he had forgotten how to swallow due to cognitive issues associated with the stroke. Things got even worse. It’s customary for stroke patients to participate in physical therapy as part of their recovery, but several rehabilitation facilities said no to Craig, thinking he wouldn’t be able to endure their program’s regimen. Sue refused to give up, and after an exhaustive search, she finally found an open door. Craig was accepted by Avantara Aurora, a top-notch facility with therapists who created an intensive physical and occupational rehabilitation plan to meet his needs. It was speech therapy that helped him learn to swallow again. “I was there [at Avantara] every day from opening to closing. When the therapists weren’t there,” Sue says, “I was moving his legs for him, raising his arms, doing whatever I could.”

Thankfully, Craig progressed well. He had learned to swallow again and was scheduled to move from Avantara and continue his therapy at Marianjoy Rehabilitation Hospital in Wheaton, one of the state’s most recognized facilities for its successes. But during that week in December when he was supposed to move, all of a sudden he forgot how to swallow again.  Once more, a watchful Sue noticed that her husband’s actions signaled something more serious than what some were calling “a bad day.” He developed a high fever, was rushed to the hospital and diagnosed with an infected gallbladder. He was in the hospital for another week and back on the feeding tube.

The highly anticipated move to Marianjoy was put on hold and Craig returned to Avantara, where he spent Christmas. As days passed, things were on the upside again and he finally moved to Marianjoy. “That’s when things really started happening,” Sue says. “He got on his feet and walked with a walker. He became more mobile, and his voice was returning.”

Finally, after 19 weeks of hospitalization and therapy, Craig returned home to a celebration of family and friends. But during this joyous occasion, Sue says both were very overwhelmed by the situation they faced. Craig could walk a little bit, but he couldn’t stand up from a chair. He couldn’t get in and out of bed. And he couldn’t walk up and down stairs. Sue accepted all of that and encouraged Craig with the thought that things would never be harder than they were at that moment. “I knew,” she says, “it would get better and better every day.”

Sadly, after Craig had been home for only two weeks, he had to return to the hospital to be treated for a bladder infection. He overcame that complication and by March he had returned to Marianjoy on an outpatient basis. During that period, he was getting stronger, his full voice had returned, and he finally was strong enough for doctors to remove his gallbladder. Sue points out that Craig has progressed from being in bed for four months to walking two miles every day. “I’m about at 80 percent of where I was before this whole thing began,” says Craig, who doesn’t talk much about his ordeal because he doesn’t remember much of it. “I’m still a work in progress.”

Even though Craig can’t recall many of the specifics associated with what happened to him or understand why, the only thing he could be sure about was that Sue would be there while he was hospitalized, serving as a vigilant advocate who had nothing but his best interests at heart. Everything she did indicated the kind of loving connection they have.

That connection between Craig and Sue began when they met while both worked in product development at the Keebler Company. They were engaged in 1991 and joined Faith after visiting the church on a Youth Sunday and were impressed by the level of activity. The couple––both involved in music at Faith before the pandemic––were married at the church on June 27, 1992. Apparently, their musical genes were passed down the line. They are the parents of three musically inclined daughters––Stephanie (trumpet), Jennifer (trumpet) and Christina (trumpet and piano). Craig (trombone and choir*) and Sue (piano) round out this musically gifted family.

It was his family, Craig says, that played a hugely important part in his determination to recover as soon as possible, especially with the wedding of one of his daughters fast approaching. “Stephanie got married on June 4,” he says proudly. “My goal was to walk her down the aisle and give a speech at the reception. I was able to do both.”

When you consider what he has gone through, and the drive and determination he already has displayed, it’s a good bet that it might not be too long before Craig reaches that much sought-after level of total recovery.

(*Craig has progressed well enough to return to the choir.)